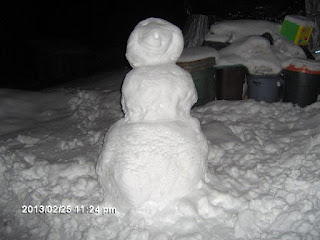 Nice background, but here he is, minus his carrot nose and no arms.  He's still happy.
Posted by Mrs. Doug at 6:53 AM No comments:

We had another nor'easter this weekend.  Seems we're on a trend here.  Another storm coming in midweek promising yet more snow.  This is the time of year when it seems there will be no end to it.

Church was cancelled on Sunday *sniff*sniff*.  Mr. D occupied the table most of the day studying while I did other stuff.  I spread some straw in the coops, did some laundry, cleaned the house since we were gone all day Saturday, got dinner ready for us all... didn't need to do much there since I had dinner all ready for church in the morning and was about 15 minutes from leaving to see if the roads were clear enough to pick up Amanda, and I made a snow man :)  OK, I know I'm almost 60, but just couldn't resist.  It was the best snowman making snow we've had all winter.  I didn't get a picture, but he's almost as tall as me and though I didn't add coal, hat, stick arms etc... he was cute with his carrot nose.

If he's still standing tonight... if Mr. D hasn't plowed him over... I'll take a picture for ya, minus the nose which was eaten last night.

After dinner, I kicked out Mr. D who had been studying all day and did a little sewing.  Here's my quilt block of the month for Feb... 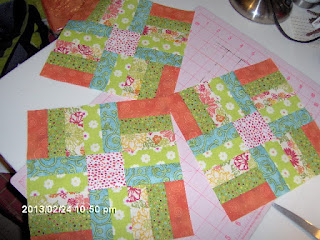 A few have said already they think these are a little "busy", but I think they will look great surrounded in white.  They have some of the same fabric as the January block I did.

Here's another pic... color doesn't look as washed out.... 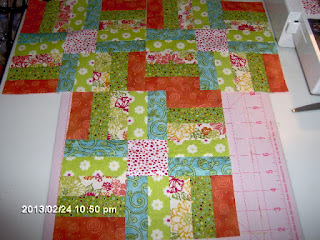 In winter I have a hard time believing that it will be summer, but I know it's coming even though today we are having more snow.

I ran across this picture of little Norman resting comfortably in my lap with little toes sticking up.  He looks so comfortable here. 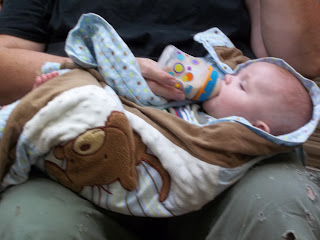 ﻿It's hard to believe he'll be a year old on April 5th.  He's getting so big and doing new stuff all the time.  He like to mimic the dog and different sounds he hears... growling and "raspberries" and clicking his tongue... so fun.  He hasn't made an attempt at walking yet but loves bouncing up and down in his jumper.  He wriggles and wiggles to get where he wants to go, but no crawling yet.  Love this little guy and also my big boy too...

So after "Nemo" we ended up with about 10" on the Millett Farm.  I was all geared up for more, but it was not certain that it would actually get that bad in our area.  We live between the White Mt. National Forest and the "Lakes Region" of NH.  All the maps that I saw had us right on the line between moderate snow and mega snow.  I'm glad to say we didn't get the mega snow even though we were prepared.

Yesterday was a little warmer and a bit rainy, so these pictures do not depict the snowfall that we received on Friday through Saturday, but it's enough.

﻿
﻿ I love the sky in this picture.  Neighbors behind us cleared out a pasture area so the light come through better than it used to.  I'm not sure if I'll miss the woods behind us or not, but probably not because I like the light coming through.


I'll probaby not see him in person till he's all grown up.  I just hope to meet him before they take off for Australia.

It's a wonderful sunny day today.  It was warm in the car on my way to work and made me think of spring, though surrounded by snow.  We are expecting more snow this weekend.

I'm trying to get together some ideas for my little Sunday School Class.  I have three little boys now.  I sent my only girl to the next class.  She's more advanced and able to read and will benefit from being with the older children.  This class I have now three little boys.  They are just beginning, so it'll take them a couple weeks to get into the routine.  I think I'll have Mr. D get out the little table and chairs again.  It seems to work well with the younger ones to have a small table so they don't get their feet up into the chairs.  More about them later.

I'm completing this post on Monday 02/18.  We lost our computer just as I was editing the last post and so I just saved what I had and am posting today.

It was nice and warm last week, but back to freezing this week.  It was terribly windy and cold at the Millett Farm last night.  Our water started to freeze in the evening around 7 pm and we caught it and blew some heat down where the pipes are so that it thawed out right away.  Whew.  The temp probably was about 1 or 2 degrees, but with the wind it felt like -30.  I went out to check Joanna's camper to make sure the fuel was good and my fingers were just about freezing when I got back and my nose was bright red.  (No wonder Rudolph's nose was red :))

Since outside activities out of the question, I decided use a little time to sew up the baby blanket for the baby shower on Saturday.  When we girls went shopping this last Saturday I was able to find some companion fabric for the panel I had purchased last year around this time. 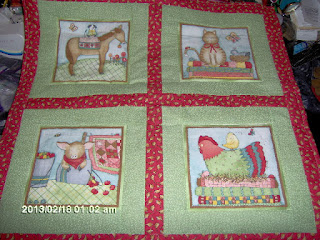 There is one other picture panel that came with these, but I think I'll save that for another project.  I love the little farm critters.  Hope the mom likes it too.  They aren't finding out if it's a boy or girl.  I think she may be hoping it will be a girl since she has a little boy already, but this would be good for either I think.

The red strips have little brown birds.  I was going to add some blue too, but didn't want it to look to "boyish".

It had to be simple, 'cause it's the only time I'll really have to work on it this week.  I could give it to her later, but it's fun to have it at the shower.

Guess I've done enough writing and lunch is over, so I'll say goodbye for now.