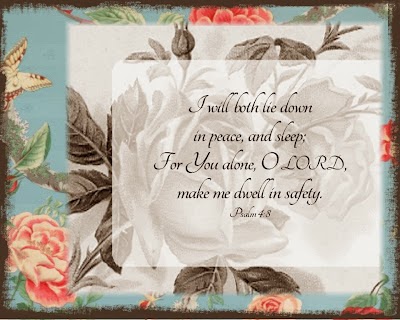 Not sure where this graphic came from, but not original to me.  I liked the verse very much and was a good thought for me to dwell on today.  I've been feeling restless and then this week came down with a bad cold so have been more confined than normal.  I've been doing some more seed shopping.  I'm not sure how much of the garden we'll have for planting this spring, but if I get things started in the little greenhouse, it should help out.

So far I have:
* Lutz Winter Keeper (beets)
* Xtra Tender 277a (corn)
* Mammoth Dill
* Sugar Star (snap peas)
* Henderson Baby Limas (beans) - 60 day variety
* Jacob Cattle (shell/dry beans)
* Romano (pole beans)
* Burgess Buttercup (winter squash) plus some saved seeds also
* Straight Eight (cucumbers)
* Pickling (cucumbers)
* We'll also pick up some tomato plants nearer to planting - Jet Star and Amish Paste
We have some asperagus and I would like to add some more to the mix this year.  We won't see those till next year probably or even the year after, but we all like asperagus.
I think that's all we'll have room for this year.  If the garden is expanded by planting time I may add some more herbs.  I want to put is some penny royal (good to use in a flea bath for the dogs with tansy which I have)  and also some sage and basil to eat fresh, freeze and dry.  I have oregano, caraway, tumeric, and camomile established already, but would like to get some other perennial herbs started.  I don't think sage or basil will keep, but penny royal should.  I'll need to experiment with others in another year as my herb garden has been reduced in size.  When we move into the house I'll probably move all the herbs out of their current locations and bring them up closer to the house so I can take better care of them.

OK, I've rambled on probably more than I needed to.  It's just in the planning stages right now, but hopefully will become reality this spring.

Any others of you planning your garden yet?

Yesterday was so wonderful.  First day I can remember when the temp was above 10.  Not really, but it was so nice to ride down the road with the car window open and just to sit for a few minutes in the sunshine.  It got me so excited for spring I went to the dollar store and bought a few seeds. 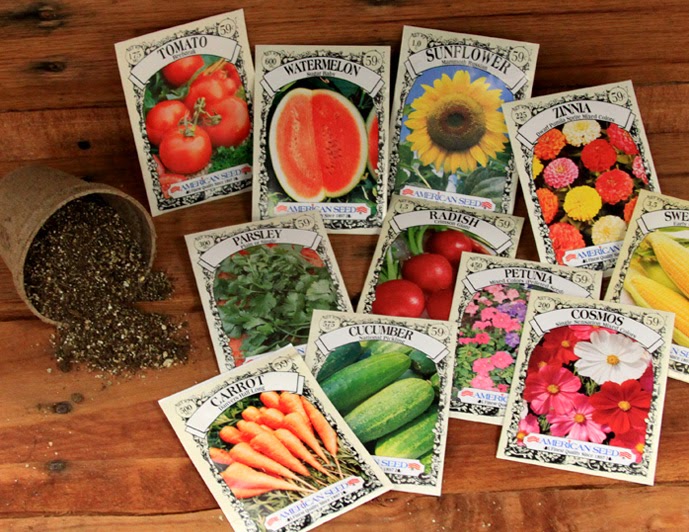 4/$1 seeds... can't go too wrong there even if you only get one or two fruit from each packet you've made back your investment.  Let's see, I bought cucumber-Pickling and Straight Eight, kale, sunflowers-Mammoth Russian, snap peas, and a few flowers which I thought might be interesting to try.  OK, it's not all that I'll grow, it was definately an impulse buy but it made me very happy.

I have all my seed catalogs for the "serious" seed shopping and I'll let you know what we decide on as soon as we make our picks.

Owl in the Chicken Coop and Other Events

Late last night I was washing eggs for sale.  We've been taking Millett Farm eggs to the COOP and we also sell them out of our box at the end of the driveway.  Since all the baskets were full I had to get them washed up.  The heater was running inside, but still I could hear the loud "ruckus" coming from the chicken coop.  I opened the window slightly (not much since it was in the single digits last night), and could hear chickens, ducks, and roosters who seemed to be having a rough time.

I called Mr. D who got up immediately, got dressed and grabbed the shotgun and headed to the coop.  We've had several invaders in the coop over the years... mink, fox and bear.  We were a little dumbfounded when there was this fellow sitting on the back roost... eyes wide open staring at us. 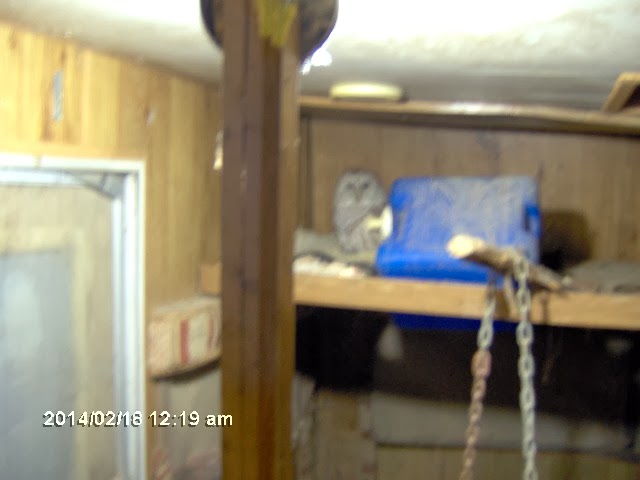 OK, I know the picture is pretty fuzzy, but this is what he looked like...

His eyes were black a coal and he was staring right at us.  It was a little disconcerting at first, but he was a little afraid and started moving around.  When he did, the ducks went crazy and all ran out of the room.  This allowed us to close off the back of the coop and leave him there till morning when the game warden could come and answer some questions for us and help us get him out without harming us or him.  He is a beautiful bird.  The game warden agreed with our deduction that he probably came in after some rodent and became trapped.  We only have "doggie doors" for the poultry to go in and out.  The big "human" doors are kept closed most of the time except when we're in the coop tending the birds.  He saw something that interested him which probably wasn't poultry.  If we'd had young birds in there, that may have been more interesting to him.

It was quite a surprise and we're glad he's out.  Our chickens tend not to lay too well when they've been aggitated.  We like the idea of him coming around and tending to the rodent population, but probably we've seen the last of him for quite some time.

We also this week had an incident not so pleasant.  We have a radiant heater in the camper that has really cut our heating costs down to size.  On Saturday evening I was doing some sewing and got up to start dinner and smelled something hot.  I looked and realized the cord to the heater was smoking so I yanked it out of the socket and this is what it left behind.... 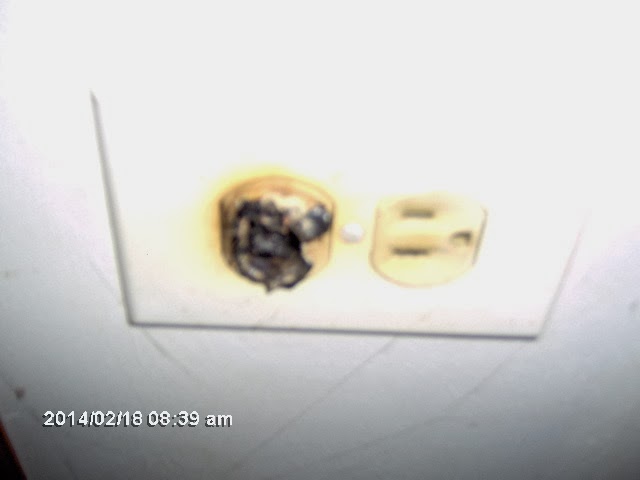 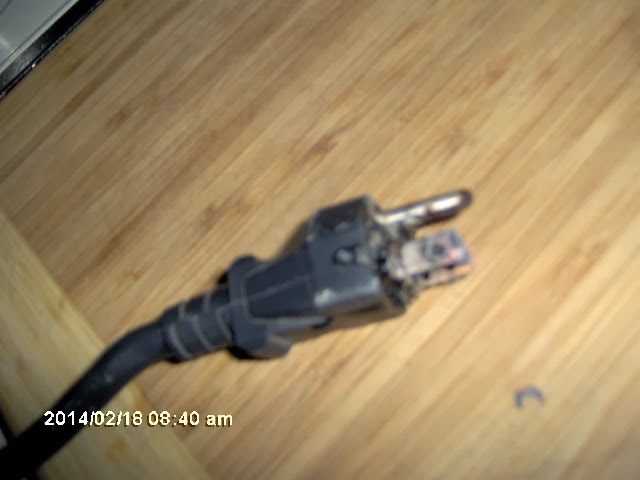 We have so much to be thankful for.  If this had happened when we had not been home as we weren't for a good portion of Saturday, this could have been very bad.  God's protection is evident.  What a great and caring God we have.

Thankfully the company will replace all this.  We've determined that the cord on the heater is just not heavy enough for the draw and the plug needs to be beefed up too, so hopefully we can get this done soon and be able to use our little heater again.

Sorry about the fuzzy pictures :(  I'm just not very good with this camera I'm afraid.

Hope you have a wonderful day and survive the snow... getting 4-6 inches again today.  I am not enjoying all the cold and snow this winter, but when I think about it... all things are from the hand of God, so guess I shouldn't be complaining about it so much.  Thank you Lord.. even for the snow.

Happy belated Valentine's Day to all of you too...

Norman thoroughly enjoyed his breakfast since he had to wait.  Especially the strawberries and french toast sticks as you can clearly see: 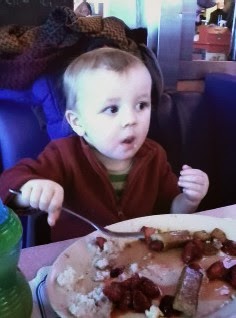 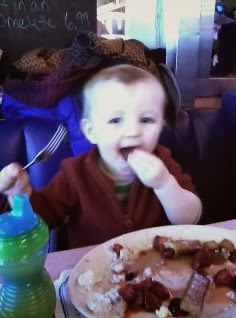 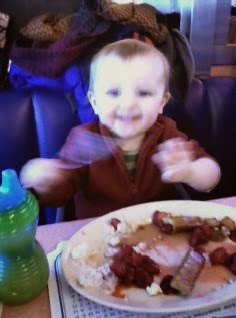 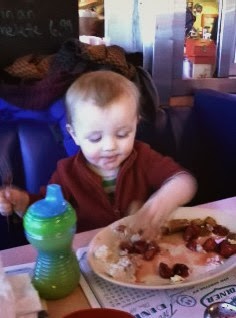 Thanks Amanda for the pictures from your camera.  We had a lot of fun.
Posted by Mrs. Doug at 11:30 AM No comments: