Hello ya'll.  I just want to update anyone who still looks in here now and then.  It's been a very busy summer and now things are beginning to slow a little.  The harvest is in, though not all processed yet and I'm getting ready to turn under the garden and soon we'll be butchering the chickens and ducks and putting them in the freezer too.  I need to clean out two freezers that got a little frosty over the summer too.

So here's a couple pictures my sister-in-love took at a recent family gathering... she put them into this cute frame for me  She's so good at picking out colors. 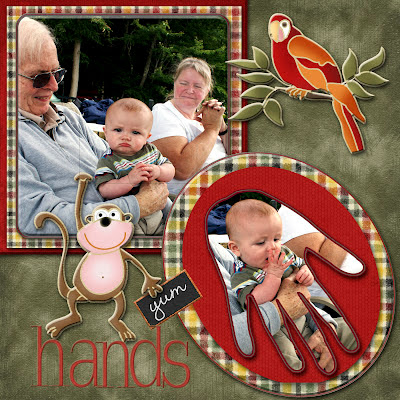 His new trick is shaking his head "no" and giving us the "raspberry". Love that little guy.

We had a good harvest by the grace of God this year.  Mr. D had no time to work in the garden, he was working on vehicles and getting ready to start construction, so it was up to me... actually I think he was able to put in an hour or two at the first.  We cut the garden size down using only about 1/3 of the space we normally do and the chickens had free range of the rest.  We didn't plant any winter squash like we usually do and I was able to plant some things 2 weeks early because of the strange weather we had this spring.

I planted Jacob Cattle beans.  = 1 bushel  (plants were attacked by a white mold.. I sprayed with a combination of milk, baking soda, and dish soap and this helped save some of the crop)

Straight 8, and pickling cucumbers = we ate quite a few and put up 7 quarts of dill pickle slices from the rest (again these were attacked by powdery mildew... used the milk treatment on them too... wasn't as successful with the beans).

Jet Star tomatoes = good crop, very little rot,  treated all the tomatoes with calcium chloride from "Gardens Alive" to control bottom rot which has been a plague in our tomatoes for two years prior.. picked 1 full bushel from 6 plants.

Romano Pole Beans =  I was able to plant 2 weeks early due to warmer than usual spring temperatures... we ate many meals off these plants and then picked 1 full bushel which I was able to process and freeze for winter.

Ruth Bible Beans = didn't do too well this year, but probably because I didn't plant many seeds and they were not in an ideal location this year.  We did, however, get a good amount for eating throughout the summer along with a few (very few) asparagus beans (won't do that again).

Gnuddel Beans = I think we rec'd about 8 seeds and from those we got about 1 quart of shell beans.  I packaged them in small amounts to add to soups and stews.  I don't think I let them go long enough, so probably won't plant again.  They need to longer a growing season than we can provide.

Kale = lots... will probably harvest this week since we just had our first good frost and kale is sweeter after first frost and so good in soups and this year we decided it was an excellent pizza topper.

Peas = were done quite early this year because of the heat.  We had a few good meals of peas.  I will not plant the shell peas again - just the edible pod.  It's too much work for so little produce.  With the garden being so small it just isn't practical.  When we have a bigger garden, I will maybe grow shell peas.

Strawberries = did poorly this year.  Rain came just at harvest time, so we lost a lot to mold and I transplanted this year, so next year may be a little better if I can keep up with the weeds.

Zuchini = all the plants I started early died right away, so I bought one at the greenhouse and it did well   Though it also got some powdery mildew on its leaves, the plant was very healthy and strong and just kept growing.  We got several nice squash to enjoy and I think if the weather holds we'll get a few more.

So the garden is not completely put to bed yet.  I want to turn the soil and burn all stubble to help prevent powdery mildew next year and get some neem to help keep the fungus down and some milky spore to help fight grubs and japanese beetles next year.

Over all we are very pleased with how the garden produced despite spending very little time there.  I let the flower beds go this year in favor of veggies.  I wish I had more time, but I am where God put me at this time in my life, so I'm happy.  I can honestly say there are days I'd prefer not to make that trip to Hartford,  but then I remember there are so many folks looking for work.  I am thankful to have a job.