Happenings in March and April

We have had quite a busy March and April so far.  It all started with a huge snowstorm early in March the same day as Town elections.  The Secretary of State sent out warnings the day before about the laws on cancelling or postponing elections which some did the year before when we had an Election Day storm, much the same only worse.  In NH we cannot cancel or postpone elections based on the weather, so we had 60 show up and went through the process regardless of the weather.  I was elected for another 3 years as Town Clerk, which I am very happy with, and we had beautiful sunshine for Town Meeting and though it snowed a little this afternoon, I think all-in-all the snow is finally going away.


In March we adopted a little pup from a shelter in Mississippi.  His name is Skippy and he's really adorable and well behaved. 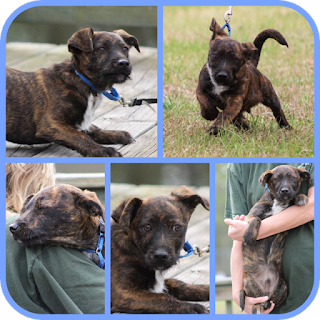 He's a lot smaller than we expected since the pictures we had were of when he was younger.  Mr. D is a little concerned that he might not be able to handle rat hunting.  He's got a good nose and great digging paws and I hope once he matures a little he'll develop into a good hunter.  He is learning how to stay home right now.  He loves to go play with the neighbors dogs (boxers) and is not timid about picking on dogs that are a little bigger than him.  He is house trained though piddles when he is nervous and he doesn't beg at the table.  He doesn't like laps, so is not a lap dog, but loves cuddles.  He doesn't shed very much at all because he has a semi-rough coat with the cutest whiskers and eyebrows.  I call him "old man" cause he's a puppy, but his face looks like an old man.

We also had a great Easter with friends at church and family at my daughter Joanna's home.  It was a beautiful sunny day.  We feasted and had some play time with dogs and J & H went for a walk with the pups.  We got home before dark and to bed early... it was a wonderful day.

I just finished typing the minutes from Town Meeting which was especially long this year.  I had 26 pages typed and they were just submitted to the DRA yesterday.  I'm so happy that is over for another year.  It is quite a process.  I also had 4 workshops to attend in March which cut down on my work time.  I am grateful that the Lord helped me wade through and I'm mostly caught up now.  I have some filing chores that need to be done to keep up with the "retention policy".

Last Thursday we celebrated a boy birthday.  Norman turned 6.  He's growing up into a fine young man and is reading and doing well in school.  I'm pleased as peaches with his Momma and how she's doing as a Mom.

Here they are being a little silly... 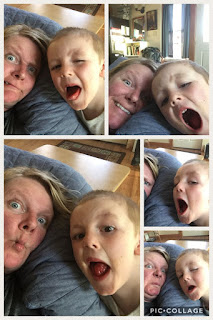 This was on his birthday I think.  She had the day off and let him stay home from kindergarten for the day.  Then they came to our house.  We gave him his presents then we had a vet appointment for Skippy and then we went to "Old McDonalds" for lunch.  I think the only reason he likes to eat there is because he gets a toy in the lunch box.  This time is was a Snoopy spinner.  He really doesn't like the food so much, but he did enjoy a Strawberry shake... not a big cake eater either.