As promised to some of my friends, I finally have taken some garden pictures.  This morning on my way down the driveway to work I had a couple of minutes, so thought I'd snap a few shots.

Thank you Lord for such a wonderful garden this year.  Mr. D and I are both amazed at the plants.  This is our first try with corn in this garden and if all goes well, it will be a success. 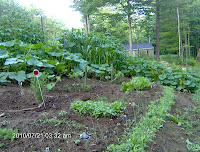 thought you'd like a before and after picture.  This is the beet/pea/chard/radish spot  I wasn't sure what would happen to the peas because it was so hot so early, but put them in a shadier spot.  Of course I had to hold the camera in some whacky angle... but you get the idea. 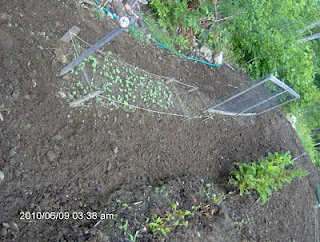 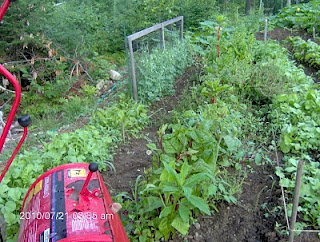 some of the old chard has gone to seed and we have eaten lots this summer so far.  I really like chard... probably better than spinach.  The peas are doing OK... they aren't as high as last years, but they are loaded with pods.  I planted regular peas this year, not sugar snap because Mr. D prefers these and said he would shell them :) 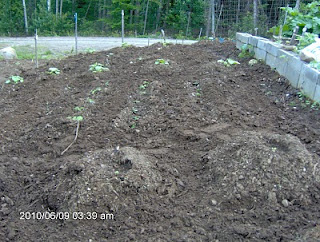 This is the "before" of the squash/cucumber patch.  We left the lower part of this area fallow and you can see now what happens when the garden is left to it's own "devises"... 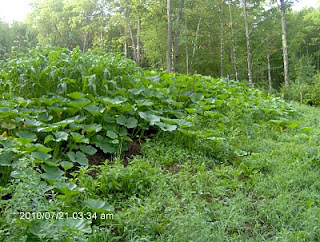 This is from the other side, but all in the foreground are weeds... lots of weeds.  You can see that the squash have filled in a little and then have gone on to overtake the fallow area as well.  We were going to till this over a couple of times this summer, but guess that's out of the question now.
We have harvested:
cucumber
zucchini
chard
some beans
radishes
some peas
rhubarb
asparagus
parsnips
basil
lettace
and lots, lots more to come.
Thank you Lord! 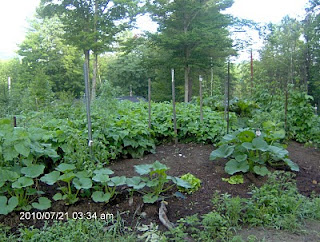 The Summer is Flying 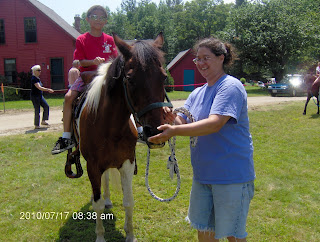 I'm grabbing a few moments at my lunch today to post an update on our summer.  It has been flying by.  Our grandson is visiting from Washington, DC and this is keeping me very busy and very happy too.  He's a delightful young man, and is quite interested in just about everything.  He love helping Mr. D with the tractor and various stuff that needs to be done.  He loves sleeping in his tent, though we've had a couple rainy nights we brought him in onto the couch to sleep.

We went to Dorchester Old Home Days on Saturday.  We participated in a tug of war, ate ice cream and Brandon got to ride a pony around and around and around... no one else was in line when he got there, so they just kept going.  He really enjoyed that.  We saw a man talk about his work with black bear... very interesting... then we came home and went to a birthday party for a young friend from church.   We had ice cream again, then Mr. D and Brandon played a game while Spot and I went for a little dip to cool off in the river. 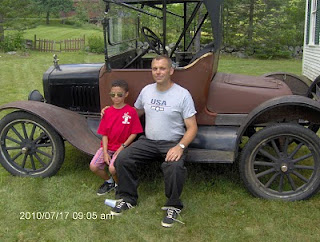 so serious here... not sure what he was thinking about, but probably about the car.  He had asked hundreds of questions about it, how did it start, were there lights, how old was it... etc...etc... 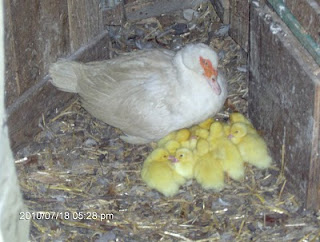 Our poultry have been reproducing.  Momma Muscovy hatched 12 little muscovies this weekend.  She's Mommy #1.  Mommy #2 hasn't hatched her brood yet, but will probably within the week.  We have another RIR who is setting, her sister hatched 4 chicks who are almost ready now to join the ranks now.  We're just waiting for her to take them outside. 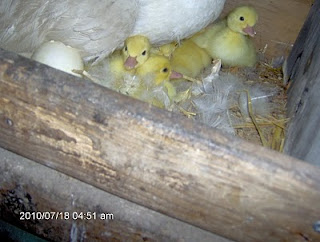 The garden has gone wild.  It's hard to walk around out there without stepping on something.  We had to consolidate the squash a little this year, so they are crowding out almost everything else.  We ate zucchini last night and the night before and will probably be looking for unlocked cars soon.  The Jacob Cattle beans are coming and I snitched a few last night just for munching.  Basically the garden is a sea of green.  Thank you Lord for the wonderful weather.  I brought some cukes today for a friend at work who loves them and eats them everyday summer and winter.  Next week we'll be doing pickles, no doubt.  We make a garlic dill.  Very crispy and excellent on burgers and even on pizza (OK, I know that sounds goofy, but really they are excellent on pizza).  The pizza thing was discovered by some kids we were working with at the time who actually did it for a joke, but turns out they were really good. 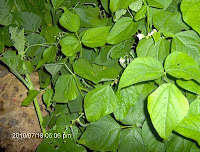 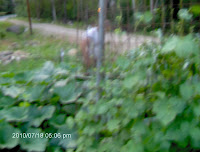 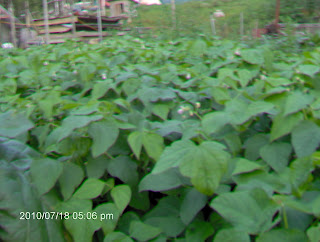 My garden pictures didn't come out too well, but I'll include a couple.  It was kinda late in the evening and was cloudy too, so the pictures were a little blurry.  Guess I'll need to get down and take some better pictures.  I like to document the gardens successes/failures for our garden journal.  If I don't hop to it, there won't be any pictures this year.
Posted by Mrs. Doug at 10:03 AM 1 comment:

I really and truly haven't forgotten that I have a blog, I just have been so incredibly busy there has not been much time for doing anything.  I have wanted to take some pictures of the farm and post them so you can see the progress of the garden and how the meat birds have grown, but just have not done it yet.

My grandson is visiting for the month of July and I want to post some pictures of him too, but have not had time for that yet either.

No promises, but I hope this week we'll get caught up a little.

We had a wonderful time yesterday for the 4th.  We had church and then the church family had a wonderful picnic lunch and a blessed time of testimonies.  Then some games for the kids.  After the picnic we went home and got ready to go swimming.  I took clothes off the line 'cause it clouded a little and didn't want a repeat of last week where the clothes line collapsed in the rain and the clothes I had out there had to all be washed again (yuk!).
We went swimming at Canaan Street Lake, a beautiful little beach.  We then went to the fireworks at Cardigan Mountain School.  It was a wonderful day.  After a little supper we got to bed around 11pm.

Tomorrow will be busy too with my daughter heading back to DC.  Brandon and Mr. D will be spending the day together.  In the evening I'll be taking the bus home from work, then I'll have to recall how to cook for an 8 year old.  Any help gladly accepted :)

Hope you have a wonderful day....